Oh, what a pleasent silence dominated the thought-cathedral in the bygone times. I remember the pale moonbeams that shone through the narrow windows I didn’t dare to approach – fragile figures of light that gave the icons life in the twighlight with such an exquisite tenderness that amazed me again and again.

In such moments I used to observe the children of the moon dancing on the shady flagstones, enmeshing the rigid statues and trying to elicit them cautious smiles. Very often I sat under vast vaults of marble, musing deeply on this diffuse why, sometimes startled by a shouting jester or this scintillating veil of ignorance and lacking comprehension. But this reflecting fool’s stream of consciousness never ended.

Now and again I stirred at the altar flanked by mighty arcades that
towered into the opaque nothingness of devouring doubts. Neither ornaments nor vague inscriptions embellished the still columns and walls in this dim palace that reminded me from time to time of a terribly vast shroud of tenderly falling rain. A fragile sheen of rememberance then glittered from afar relating of times before I closed my eyes to fall endlessly and to roam in unknown spheres in search of the thought – cathedral.

Finally, I reached it and I felt relief. But now? Although I understood such delusive visions, they enlightened my mind. During serenades of
Chopin and Tschaikowsky the horned serpent Ninnghizhidda winded up the arcades murmuring cryptic spells. Enki, the father of Deep sang ancient poems in a warlike manner, and I saw the majestic gardens of Babylon and Ur in their splendid times.

The colours of chaos revealed brutally to my bleeding eyes. I observed my anxious face emerging from an ocean of devine subjugation, laughing idiotically and being drunk of transcendent wine that got soiled by the cruel tyranny of decadent gods in battle. My face, a desperate mask of ignorance. My hands, grabbing for the wildly swirling thoughts in these halls of disorder.

I remember I awkwardly tried to catch some of these chaotic reflections that took on farcical forms. Sometimes I captured one of those poplymorphous entities. Then a shrewd idea lamented in my merciless grey hands. In such moments a suffocating desire strangled my throat. I felt the necessity of obtruncating and dissecting such whimpering thought – shivers and I suffered from this cruel need that filled me up. That is what was, that is what is.

I still dwell in the thoughtcathedral, musing deeply on this diffuse why, sometimes startled by a shouting jester. I am haunted by delusive ideas of cognition that try to engulf my reflection. Eons are passing by. There’s always hope when I succeed in catching one of those swirling ideas, studying its subtile anatomy.

I am waiting infinitely for the day I understand the thought-cathedral’s architecture. That is what was, that is what is, but will this ever be?

Sometimes silence tortures the lucid consciousness to such a degree that the quality of observation dilutes in the passionless void of my apathy. From time to time it oppresses reflection and gnaws at its wings until croaking delusions rot in the blood of their self-caused wounds.

More often silence thunders like a myriad of mountains tumbling down and burying life with no mercy. I am ignominously prisoned in the thought-cathedral’s silence! Sometimes I imagine the patient crows floating around the thought-cathedral’s towers I never saw. Vague shadows that shout from afar, mocking my weakness cruelly. Quite often silence smacks like an old hideous animal that devoured me a long time ago. Here, I am withering in the thought – cathedral’s bowels.

I know that I have to escape this silent tomb of stinking loneliness. To write this down means a fragment of order in the gloomy chaos that surrounds me like a thick substance and estranging me from myself. I have to close my bleeding eyes! I have to forget the creeping silence in these halls of disorder that rape clarity permanently! I have to lay down all my needs! I have to aspire to (the) harmony beyond the gate of the thought-cathedral’s gorge.

My flight should be yours. The consequence of my hatred towards this obnoxious opaqueness of my thoughts. I have now opened the gate of these halls of perpetual sleep. My eyes are dazzled and twinkling in the splendour of truth and virtue. I observe the truthful waves of an incredibly vast ocean of knowledge, tender waves that surge onto the soiled shores of these silent walls of lie.

Suddenly an abrupt fea rgrabs for my feeble limbs. From deep within the thought-cathedral’s bowels a dull plaintive cry passes this ruin’s threshold? I have to flee now, leaving behind the gloomy chaos, the creeping chaos, this oh so malicious and omnipresent consciousness, paralysing clarity wickedly, Nyarlathotep! A messenger of the old ones that are dancing infinitely in absurdity within the spaceless and abstruse mess of distorted dimensions no eye will ever see.

Now I am standing on this dim tomb’s threshold breathing in cognition and observing the waves of knowledge comforting my feet. I emerge from a blissful veil that caresses my crippled senses. I hesitate. I am standing on the border between lie and cognition unable to move. The crows are swirling around the thought-cathedral’s tower mocking my weakness cruelly.

And I didn’t walk. I didn’t behold what is precious truth. I didn’t walk and now I am cocooned by this obnoxious opaqueness once again. I am ignominously prisoned in the thought-cathedral’s bowels, musing deeply on this diffuse why like so many others that wither in the ruins of their defiled reflection.

I am roaming in my thought-cathedral’s halls, mocked by the crows I saw a long time ago, and Nyarlathotep’s chaos fills me up, reminding me brutally and for all eternity that the thought-cathedral’s gate is closed now. But I found a secret seed when I saw truth in its splendour.

I dream of trees and orchids in scarlet spheres. I dream of seven moons shimmering above twilight chapels. I dream of hills overgrwon with trembling juniper. I dream of silent colonnades leading through stony archways in infinite gardens.

I grope my anxious way through whispering beech-forests. And I discover myself sleeping in my close bed. Under an ancient column with weather-beaten inscriptions. You, kissing my white cheek and crying silver tears. Can’t you help me, beloved one? Don’t wake me up, just wander with me in thy dream.

Lie down close to me. And let me see. Your poetry.

Of trees and orchids the wise man sings in minor. Ponds are reflecting the foliage’s play. The oleander is in bloom. And sylphs delight this fragile beauty. Oh, my trees, oh, my orchids, what a nocturnal romance. And don’t wake me up, just wander with me in thy dream. Lie down close to me. And let me see your poetry. What a nocturnal romance.

Of trees and orchids is one of the only more stridently avant-garde brutal death bands I’ve seen who appear to be making such music not to prove a point, but out of necessity for the songwriting. Always a good thing. (metal-archives.com) 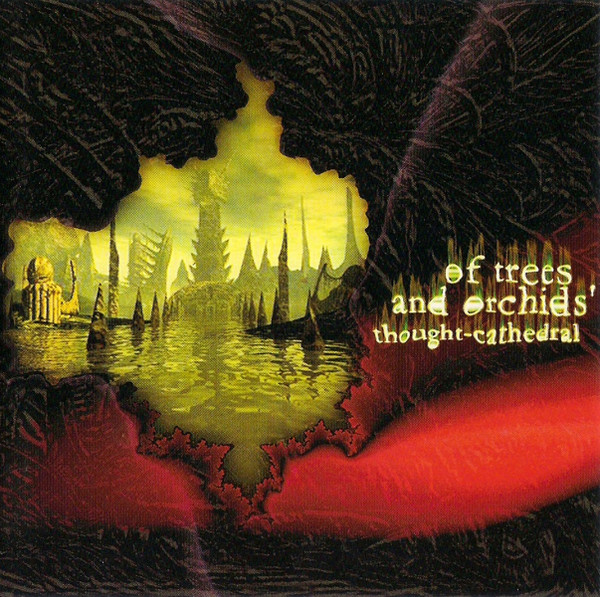 Thought-cathedral is the second demo / album of trees and orchids put out as a three-piece. Back then, Dirk (formerly Despondency) was in charge of the drums and he clearly accomplished an awe-inspiring job. Thought-cathedral clearly marks a rapid progression within the outfit. The tracks were composed between 1998 and 2000 and recorded in 2000/2001 and naturally document the maturation process of the band. At the turn of the century of trees and orchids played more intricate, sophisticated and brutal material than captured on the debut. Lyrically Florian focused on escapist reveries dealing with the power of contemplation. This demo comes with blastbeats, the use of 7-string guitars for the first time, female vocals and some pretty massive tracks.

This website uses cookies to improve your experience while you navigate through the website. Out of these, the cookies that are categorized as necessary are stored on your browser as they are essential for the working of basic functionalities of the website. We also use third-party cookies that help us analyze and understand how you use this website. These cookies will be stored in your browser only with your consent. You also have the option to opt-out of these cookies. But opting out of some of these cookies may affect your browsing experience.
Necessary Always Enabled
Necessary cookies are absolutely essential for the website to function properly. This category only includes cookies that ensures basic functionalities and security features of the website. These cookies do not store any personal information.
Non-necessary
Any cookies that may not be particularly necessary for the website to function and is used specifically to collect user personal data via analytics, ads, other embedded contents are termed as non-necessary cookies. It is mandatory to procure user consent prior to running these cookies on your website.
SAVE & ACCEPT